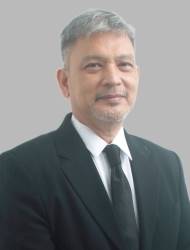 
JUAN EDUARDO “ Jed” ARBOLEDA CFE is a Communication Arts graduate of Saint La Salle University in Bacolod City. After College he worked at Warner Elektra & Atlantic Records  Philippines where he mastered his skills in Television Production as well are Music Recording and Film distribution under Bell Films a subsidiary of WEA Records.

The entertainment phase of his career was followed by extensive work in retail being the Franchise and Export Manager of Suyen Corporation the company behind the iconic brand BENCH for 14 years. Thereafter he learned the intricacies of Leasing as the Leasing AVP of the Araneta Center Inc. and the Sales and Marketing Head of Uniprom, the company behind the Araneta Coliseum and the Vertical Gross Leasable Areas of the whole Araneta Center.

This was followed by his exposure to the Real Estate industry as the Sales and Marketing VP of Fil Estate Urban Development Corp. handling the titled inventory of Fil Estate such as Southwoods, Cathedral Heights, Fairways and Bluewaters in Boracay among others.

Gathering more experience and efficiency in the field of Marketing, he landed a job as the AVP Marketing of SM Family Entertainment Corp. which was tasked to sell and promote SM Bowling, SM Science Discovery Center, SM Ice Skating and SM Storyland which initially introduced the giant Ferries Wheel in major SM locations in Luzon, such as SM by the Bay in Mall of Asia and SM City in Clark, Pampanga.

After retiring from regular employment he became a member of the Educational Committee of the Philippine Franchise Association as well as its resource person, this was followed by his stint at the Franchise Corporation as its part time Trainor where he was able to acquire his Certified Franchise Executive Certificate (CFE).

Right now, JUAN EDUARDO “Jed” ARBOLEDA CFE would be most happy to take care of your business selling and buying needs as a member of the LINK Business Brokering Batch 22.